The Market Potential for Natural Vanilla 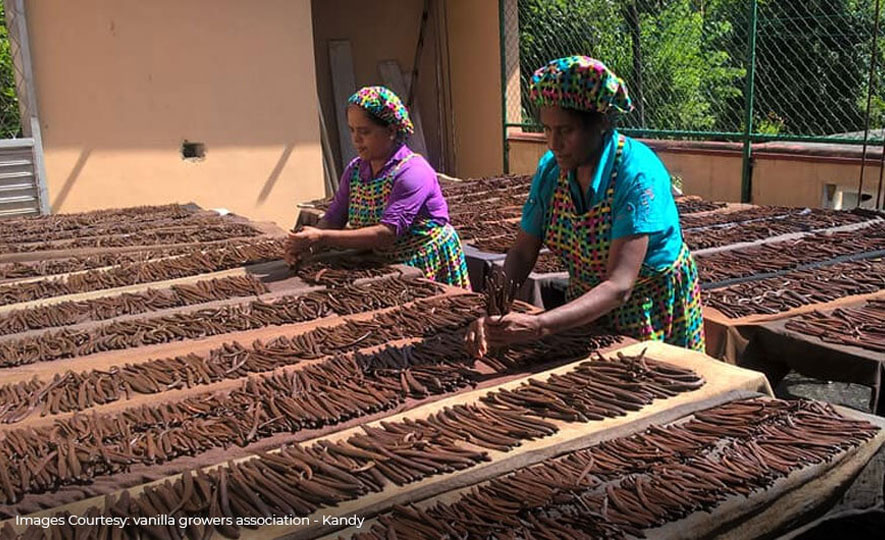 Vanilla is the second most expensive spice in the world and the only orchid type that we use in food. Vanilla is grown mainly in Central Sri Lanka due to the cold climate and wet weather conditions. The plant is a member of the tropical climbing orchid family Orchidaceae. Even though Vanilla is native to Mexico, its cultivation the plantation has spread itself across the world with time.

Vanillin is the source of the sweet aroma of Vanilla, which is found on the best seed pods that have gone through four to five months of curing after being harvested.

The enzymes that transform the Glucovanillin in the plant into vanillin, the molecule that gives vanilla its distinctive aroma, emerge only through curing. Cured pods contain about 2% of Vanillin. Other organic constituents found in vanilla include vanillic acid, oleoresin, sugar, gum, calcium oxalate, alcohols, aldehydes, and esters that contribute to its fragrance and flavour.

Industries that Use Vanilla

As one of the most popular flavouring agents in the world, vanilla plays a vital role in many industries. In addition to enhancing the flavour and fragrance of food and beverages, the spice is used for many purposes across various industries.

Vanilla is a significant contributor to the flavour of many foods and beverages, including confectioneries, baked products, sauces, tea, coffee and other beverages. Not only does it enhance the flavour and fragrance of a food item, but it also adds to its consistency as in the case of various sauce types and frozen confectioneries like ice cream and yoghurts.

Vanilla ice cream is one of the most consumed and most popular flavours of ice cream in the world. Sadly, not every vanilla-flavoured ice cream contains real vanilla. Some products are a blend of skimmed milk, water, glucose, vegetable oils, and synthetic vanillin, which can be produced from reliable sources such as wood pulp and petroleum.

A considerable share of natural vanilla produced annually is used in manufacturing high-end cosmetic products. The cosmetics industry is fond of vanilla extracts. Various forms of vanilla, including vanilla essence and powder, are used in producing soap, moisturisers, perfumes to add nutritional benefits and fragrance.(1)

Vanilla’s medicinal value has not received much attention. Vanillin, a chemical compound found in cured vanilla, can help to battle a blood disease called “Sickle-cell anaemia”. Direct consumption of vanilla extract does not help this cause since the enzymes destroy vanillin when it reaches the stomach. Therefore, currently, a prodrug, which turns into an active drug inside the body has been made using vanillin, making it easier for the vanillin component to perform inside the body. (2) Pure vanilla extracts also help weight loss, treat cough, digestive problems, and menstruation-related complications.

The Rising Demand for Natural vanilla

Although vanilla is one of the world’s most popular spices and an essential ingredient in products ranging from chocolate to perfume, it is getting harder and more expensive to find fine quality natural vanilla.

Today, the wholesale price of natural bourbon vanilla could cost as much as USD 600 per kg, mainly due to the rising demand for natural vanilla and the lack of production to meet the growing global market.

The rise of disposable income of the world population has also triggered the demand for luxury consumer products, including natural vanilla-based products. Within the next 20 years, 3 billion people around the world are expected to be categorised under this segment. The sale of food, beverages, pharmaceuticals, and personal care products are the main industries that sustain the growing demand for natural vanilla.

Vanilla is one of the economic crops that is hard to grow and maintain and requires a lot of time and workforce. It requires 60 hands for pollination to produce 1 kg of cured vanilla beans. The curing process takes months. The maturity period of an average vine is four years leading to an inevitable shortage of natural vanilla. As a result, only less than 1% of vanilla flavours worldwide comes from the natural source, the vanilla orchid.

Synthetic vanillin is available in two forms which are lignin-based and guaiacol based. Lignin-based vanillin is made of wood pulp, and it has a richer flavour when compared to guaiacol based vanillin, which is considered to be more of a cost-effective product. These alternatives have been able to serve the global vanilla market, doing their best to satisfy vanilla fanatics worldwide. At the same time, they are also a threat to the natural vanilla industry.

Even though natural vanilla cultivation sounds like a textbook case of a lucrative agribusiness, the entire natural vanilla industry can go sideways due to unexpected fluctuations in the global markets. While extreme weather conditions, weak crop-security, and exporters who hoard inventory and speculate on further rises have also kept prices high, but vanilla cultivators around the world from Madagascar to Indonesia, Mexico, France and Sri Lanka hope for better regulations and streamline of the global vanilla market ensuring price security and consistent demand for natural vanilla.

With the view to empower the vanilla cultivators in Sri Lanka, Sri Lanka Export Development Board in collaboration with the Ministry of Agriculture has launched ‘Smart Agro Vanilla Project’ a new program under the One Village One Product (OVOP) program.

Under the programme, 14 groups of vanilla farmers were provided financial and material assistance as well as an assurance of post-harvesting purchase through vanilla exporters registered under EDB Sri Lanka.