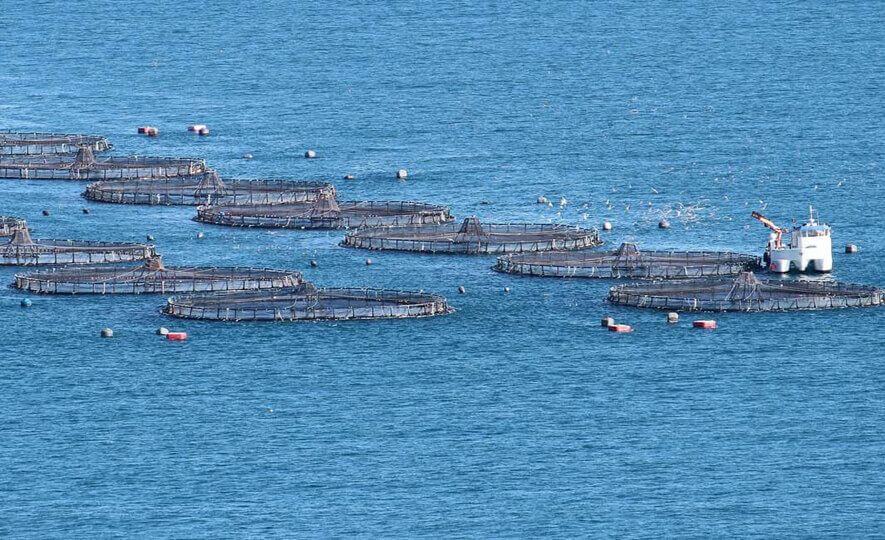 During Sri Lanka’s centuries-long history of offshore fishing, the country has been mainly dependent on the natural fish production within the 200 nautical miles of Exclusive Economic Zone situated in the Indian Ocean.

According to Food and Agriculture Organization (FAO), nearly 50% of the seafood consumed worldwide comes from aquaculture, while over 90% of Sri Lanka’s seafood is still caught wild. During its Sustainable Management of the Bay of Bengal Large Marine Ecosystem (BOBLME) project, FAO identified two major threats to the ecosystem including the overexploitation of living resources, which is directly linked to unsustainable fishing practices.

Although the sustainability of the sole dependency on natural marine resources has been long questioned, an effective solution to co-manage the marine resources never materialized until a few years back, when the country took a great positive stride by establishing off-shore fish farms to breed fish species holding a greater demand from the countries in Eastern Asia and Europe.

The aquaculture industry in Sri Lanka was launched in the early 1980s with investments from large and mid-scale multinational companies and was highly concentrated in shrimp farming in the mangroves, salt marshes, and brackish water areas. Today the country has about 1400 shrimp farms and 70 hatcheries.

By the early 1990s, the commercial farming of Indo-Pacific Swamp Crab was introduced to the coastal lagoons of Sri Lanka and was speedily adopted at mid and small-scale farms in coastal Sri Lanka.

In order to cater to the rising demand for crab varieties produced in Sri Lanka National Aquaculture Development Authority (NAQDA) has initiated the establishment of crab cultivation zones in Hambanthota and Batticaloa. Known as crab cities these zones would promote private sector participation in crab culture and harvesting.

In addition, National Aquatic Resources Research and Development Agency (NARA) initiated a community-based Bi-Valve farm in the Puttalam Lagoon to investigate the potential of bi-valve farming in Sri Lanka for local and export markets. Owing to the rising success of the Bivalve culture in the Puttalam Lagoon, NARA has initiated the plans to gazette a zone in the Puttalam Lagoon for Oyster Culture. Today, nearly 100 small and mid-scale oyster farmers continue to harvest oysters for exportation through the private sector to Hong Kong, Taiwan, and China.

Despite a comparatively early start, Sri Lankan private sector involvement in offshore fish farming has been limited due to the high cost of production and the high cost of commercial feed and as a solution the Ministry of Primary Industries has made a timely intervention by providing a series of financial and infrastructure incentives to promote fish farms among large and medium scale players in the fisheries sector.

Having established two Fisheries Mega Zones in Ampara and Killinochci areas in the Eastern and Northern Sri Lanka, the government of Sri Lanka seeks to increase the country’s stakes in the global seafood market, through farming of high-value species to increase the present foreign revenue of USD 240.65 million.

Once limited to crab, shrimp, oyster, and lobster farming, offshore fish farming methods are now being extended to other species like Asian Sea Bass or Barramundi. Finfish, crab and sea cucumber; five seafood varieties with high global demand and depleting stocks in the wild.

While the offshore Barramundi and Finfish farming is being conducted under private sector investments, within the fisheries zone on the Trincomalee ocean demarcated by the Ministry of Public Enterprise Development.

Moreover, the National Aquaculture Authority of Sri Lanka took the initiative to launch a new sea cucumber hatchery in Mannar last year to maintain a steady supply of juveniles to the Sea Cucumber Farms operated in Mannar by the private sector and NARA.

In addition to producing seafood varieties, offshore fish farming can also be used for organic aquaculture production, which provides the country’s aquaculture farmers the ability to target high-end seafood markets around the world.

To maintain the product quality and environmental impact of Sri Lanka’s fish farms, the Department of Fisheries and Aquatic Resources monitors the fish products processed for export markets. The Fishery Product Quality Control Unit (FPQCU) monitors the process of culturing, harvesting and processing of seafood by applying a HACCP based quality system to aquaculture products from Sri Lanka and enhancing the fish quality control system in Sri Lanka for exporting fishery products.