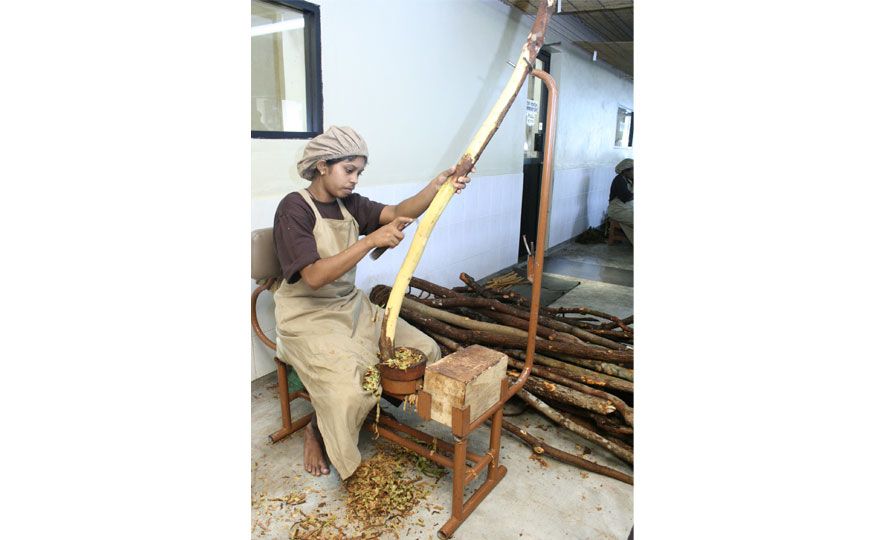 The soft, golden coloured and delicate cigar like rolls of Ceylon Cinnamon has long been an essential part of world cuisine and herbal medication yet claims its' origin to the humble cinnamon groves in the Western coast of Sri Lanka.

Although Sri Lanka is mostly celebrated for its' Ceylon Tea, Cinnamon has been among its top exports during the past centuries and most of the world's colonial powers had waged long and gory battles over the monopoly of Ceylon Cinnamon export.

The Ceylon Cinnamon (Cinnamomum zelanicum/ Cinnamomum verum ) referred to as “sweet cinnamon” and “true cinnamon” is considered superior to the other types of cinnamon available in the global market as it contains the right flavour, aroma and softness. The word "verum" in this species name comes from the Latin word verus for "true," and is connected with the reason for being referred to as "true cinnamon”. Scientific research has confirmed that Ceylon cinnamon contains the least amount of coumarin, a substance that causes liver and kidney damage, when consumed in excess compared to cassia and it is within safe limits recommended by FAO/WHO guidelines.

Ceylon Cinnamon is very mild and sweeter than Cassia Cinnamon. It has citrus, floral and clove notes undertones. Those who are used to the harsh and overtly spicy taste of the common Cassia will find Ceylon Cinnamon to be very different.

Most of Sri Lanka's best cinnamon groves are concentrated in and around Western and Southern provinces of the country, with the best of the Ceylon cinnamon growing in the district of Negombo, to the North of Colombo. It has now penetrated to the inner part of the country including UVA province.

The light brown coloured outer bark of the Ceylon cinnamon tree is peeled off to reveal a softer, light yellow coloured inner bark, which is peeled off and dried into the world renowned Ceylon cinnamon.The bark of the cinnamon tree is harvested twice a year, immediately after the two monsoon seasons that drench the Western coast of Sri Lanka. First harvest of cinnamon can be taken after three years of planting and harvesting is done when the bark color of the stem turn in to brown and stick diameter is around 3-5cm. Branches and leaves are removed from harvested sticks before peeling and harvested stems should be peeled on the same day.

Cinnamon peeling follows an age old tradition still involving the tools of trade used centuries back and is the specialised task of skilled peelers. Sitting on the floor and armed with his traditional tools of trade, the cinnamon peeler scrapes of the rough outer peel of the stems. The inner bark is rubbed down using a brass rod to smooth the surface and to loosen bark from the hard wood.

Then, with the precision of a master surgeon, he slits two parallel slits on the treated stick and carves out the soft inner layer of the bark in one piece, without damaging or fragmenting the bark. These slim and delicate layers of bark are packed in layers, one inside the other and overlapped from one end to the other to produce rolled and layered quills of Ceylon cinnamon.

Layers and layers of these quills are covered and left to ferment for a day prior to air drying them in-doors on roof level racks for four to seven days. In its' dried form the cinnamon quills curl into a golden coloured cigar like rolls, which are trimmed in to the length of 106. 7cm as specified by global cinnamon market.

In a secondary packing process these multiple quills are packed in small containers or packets or processed as ground cinnamon while cinnamon chips and leaves are used for the extraction of cinnamon bark oil and cinnamon leaf oil.

The Export Development Board (EDB) in collaboration with the Spice council has taken steps to upgrade the traditional cinnamon peeling centres to the Good Manufacturing Practices (GMP) level to assure the purity and the health friendliness of such products & some exporters have obtained the HACCP standards to satisfy the food legislations and quality standards in the international market. Steps have been taken to develop skills and competency by establishing a Cinnamon Training Academy to train Cinnamon peelers to peel cinnamon adhering to food safety standards such as GMP and HACCP. This project was initiated as there is a severe shortage of Cinnamon peelers and peeling under international food standards of GMP and HACCP, which restricts the industry’s production capacity.

Main objective of the project was to train adequate number of peelers in order to increase Cinnamon exports by 30-50% within 2 -3 years’ time and also to access high ended value added quality conscious European, US and Japanese markets. Currently, the industry is lacking over 35,000 skilled workers to carry out the harvesting and producing cinnamon according to the export market demand.

Sri Lanka commands more than 85% of the world market share for real Cinnamon. Ceylon “true Cinnamon” is now being exported to the world market under the National Brand name ‘Pure Ceylon Cinnamon’ owned by the EDB. The trade mark has been registered in the main Cinnamon export markets such as the EU, USA, Peru, Colombia and Mexico. Sri Lankan cinnamon exporters who are authorized to export value added Cinnamon products using PCC logo on their products could be viewed from the following link. http://pureceyloncinnamon.srilankabusiness.com/portfolio.php

Despite the various forms and brands available in the global market, the stringent quality control involved in growing, production and packaging of Ceylon cinnamon ensures that all Ceylon Cinnamon products are uniforms in its taste and aroma and are still good enough to plunge nations into bloodied battle.