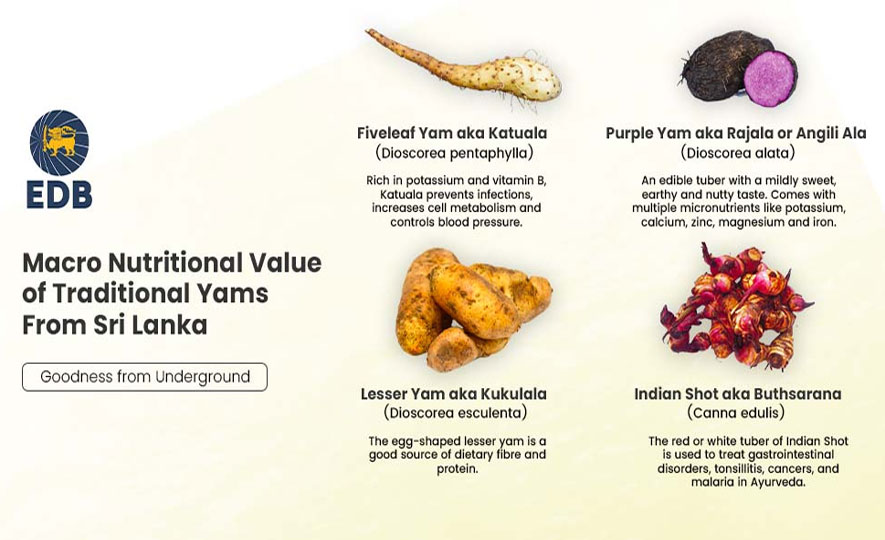 There are around 55 identified traditional and indigenous yams and tuber crop species in Sri Lanka and they grow in almost all parts of the country. The specialty of traditional yams is that they are easier to grow and can withstand unfavourable harsh climate conditions. As they can endure such soil and climate conditions, they require relatively less agricultural input, thereby leading to lesser agricultural expenses. That is why these yams and tuber varieties emerge as an apt solution to the pending food crisis; the world population is supposed to be 55 billion by 2050 and the food demand is projected to sky-rocket subsequently. Food security will inevitably be in question and it is vital to explore alternate food sources. Provided that traditional yams and tuber varieties require less agricultural input and bring significantly high nutritional values, they seem to be an ideal solution to the increased food demand and there is escalating interest in Sri Lanka to expand large-scale traditional yam cultivation.

Some of the widely known traditional yam varieties come from the Dioscorea genus which consists of around 630 species. Out of them, around 40 Dioscorea varieties are grown in Sri Lanka.

Like most other Dioscorea species, Dioscorea pentaphylla is grown in home gardens, particularly in the wet and intermediate zones in Sri Lanka (2). Its prickly vine twines counterclockwise around objects and produces an edible tuber known for its distinct taste. It is a seasonal crop that is harvested once the leaves turn yellow in colour and vines wither. It serves as a primary, secondary, or supplementary staple in various regions in Sri Lanka.

As Katuala is rich in potassium, it helps to maintain the proper functioning of kidneys and to control blood pressure. It also contains Vitamin A (26.25±1.09 mg/100 g) and is good for eye health. It should be noted that a study focusing on the vitamin contents of Katuala, Rajala, Angili Ala and Kukulala reports that vitamin A is found only in Katuala. Furthermore, Katuala comes packed with Vitamin B varieties and a 100 g serving of Katuala contains 1.28±0.02mg and 2.93±0.02mg of vitamin B1 and B2 respectively. This high vitamin B content is beneficial for overall health and cell metabolism. In addition, it also prevents infections (1).

Purple Yam aka Rajala or Angili Ala (Dioscorea alata)

Rajala and Angili ala fall under Dioscorea alata species. It comes with a fleshy underground stem that contains only one large tuber per vine. Like all other Dioscorea species, Dioscorea alata is also a seasonal crop and the tubers are generally harvested from December to February. This variety is distinct from other varieties as it has a vivid purple color; however, some tubers are found to be cream or plain white too.

As with all tubers, the main component of Rajala and Angili Ala is starch and the dry matter of tubers contain 75.6-84.3% starch (5). The total carbohydrate contents of Rajala and Angili Ala are 23.48±0.32% and 24.02±0.32% respectively. Research further shows that both tubers contain approximately equal moisture contents, 66.54±6.81%, and 65.53±9.38%, to be precise (1). Soluble sugar contents of Dioscorea alata tubers are relatively low and are less than 1.5%. In contrast, they contain a relatively higher amount of crude fat with 7.4% of crude fat in Rajala. As a good source of energy, 100 grams of Rajala contains 383 kcal of total energy (5).

Research on the vitamin profiles of Rajala and Angili Ala show that it is packed with a significant amount of vitamin K or Phylloquinone, a micronutrient that is not found in Katuala or Kukulala. Rajala and Angili Ala contain 0.74±0.00 mg and 0.74±0.00 mg of vitamin K per serving of 100 grams respectively. The presence of vitamin K in these tubers helps consumers with bone health, particularly preventing clinical fracture of postmenopausal women with osteopenia, according to research findings (4). Certain amounts of vitamin B1 and riboflavin were also recorded in Rajala and Angili Ala, suggesting that they possess antioxidant properties. In addition, Dioscorea alata species are chock full of vital micronutrients. For example, 100 grams of Rajala contains 1291 mg of potassium, 72.8 mg of Calcium, 3.4 mg of Zinc, 64 mg of Magnesium, and 10. 4 mg of Iron (5).

Yet another Dioscorea species, Kakulala is a widely cultivated crop in Sri Lanka thanks to its short maturity period and distinct flavour (1). It is Connally known as ‘lesser yam’ and is native to Southeast Asia. It produces a small egg-shaped tuber that lies shallow in the soil. The tuber is white and has a thin peel. In Sri Lanka, Kukulala is grown as a garden vegetable. Locals consume it boiled with accompaniments or cooked as a vegetable.

Kukulala is a tuber that is used in alternate systems of medicine for the treatment of various ailments. For instance, in Ayurveda, Kukulala is widely used to treat anorexia and excessive thirst. It is also known to aid weight loss and increase urination. Locals further use it as an appetizer (7). In terms of its micro-nutritional value, it is compacted with essential vitamins and minerals. For example, Kukulala contains a considerable amount of manganese: 4.42±0.10 µg/g. The same can be said about its potassium and magnesium contents as well; in fact, it contains 4900±0.24 and 280±0.02 µg/g of potassium and magnesium respectively (1).

Canna edulis, commonly known as Indian Shot, goes by the name Buthsarana amongst the locals. It is a plant with large elongated leaves and produces scarlet-red flowers. Thanks to the vibrant color of its flowers, Buthsarana is commonly grown as a flowering plant in gardens, in addition to its uses as a tuber crop. It grows well in the wet zone and the lowlands of Sri Lanka. The tubers can be harvested 8-10 months after cultivation. There are two types of Buthsarana tubers as red Buthsarana and white Buthsarana (8).

Like most other tubers, Buthsarana also contains a lot of moisture, 50.55% to be exact. The rhizome of Buthsarana contains 4.17% carbohydrate, 4.81% protein, 2.85% ash, 4.35% lipid, and 33.16% fiber (9). In comparison to the fibre content of its leaf and seeds, the tuber has the highest fiber content and is therefore used as a treatment for stomach-related ailments. The high carbohydrate content in it makes it a secondary supplementary crop in many localities.

The rhizome, flowers and the leaves of Buthsarana are used to treat several illnesses such as gastrointestinal disorders, tonsillitis, cancers, malaria, and acute jaundice type of hepatitis. In addition, it is said to have demulcent, diaphoretic and diuretic properties (10). In addition, due to the high fiber content of Buthsarana, it is generally considered to be effective against constipation as well.